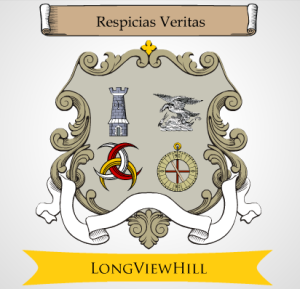 My recent post about my personal code took a couple of days to write. While I was working on it, I got interested in coats of arms and family mottos. Here’s a smattering of things I found:

The first was a list on Wikipedia of common Latin phrases. What a great find! Some of my favorites:

cacoethes scribendi – “the incurable desire (or itch) for writing affects many.” I think WordPress should make this their motto.

celerius quam asparagi cocuntu – Or simply, “faster than cooking asparagus.” Awesome. This is going to replace “in two shakes of a lamb’s tail” in my vocabulary forever.

mea navis aëricumbens anguillis abunda – “My hovercraft is full of eels.” Exactly so.

clarere audere gaudere – “[be] bright, daring, joyful.” I love this. I may have to take this one on as my own motto.

Speaking of which, I also used Google Translate to translate my personal code into Latin. “Loyalty, Respect, Responsibility, and the Right to Tell Stories.” Responsibility didn’t translate, I probably have the syntax wrong. “Responsible” did, but it didn’t feel right. “The right to tell stories” made it pretty lengthy, so after fiddling with it a bit, I chose the word “Truth” instead. Afterall, all stories, even fiction ones, have their own truth. The result:

That sent me on an internet journey researching coats of arms. I found this site that gives the meanings behing the colors, the animals and more: Fleur-de-lis Designs. So fun! I hadn’t known that the patterns are called “furs”.

Which of course, lead me to a page to make my own coat of arms as shown above. When I tried to add my motto, it was too big for their character limit, so I went with Respicias Veritas.  Respect Truth. I like that.

So, what does all of this have to do with anything?

Nothing, really. Except that I have a friend who was telling me about some life changes she’s been going through. She’s working with a therapist on a lot of the same questions I have – Who am I? What’s next? What do I want? Who do I want to be? Her therapist had her working on developing her own Personal Life Statement, and when she told me about it, it became the seed that got me thinking about my own. These are all off-shoots of that. Although it has been fun researching family mottos in Latin and making my own coat of arms for the blog, it hasn’t been frivolous. It is all a part of being very conscious of who I am now, and who I want to become.